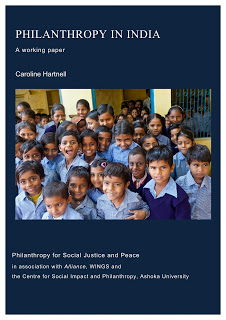 This report on
Indian philanthropy is based on a study that started in 2016. It is part of a
larger study in other emerging economies to review the current state of
philanthropy and what role it is playing in the world.

CAP is among the
many organisations in India consulted for this study.

The Report can be
downloaded as a PDF file at:
http://www.psjp.org/wp-content/uploads/2017/10/Philanthropy-in-India-October-2017-1.pdf
The study aims to
throw light on the current state of Indian philanthropy through conversations
with people who have been trying to promote, support or strengthen different
areas of philanthropy. This includes various forms of giving by the wealthy;
social justice philanthropy, self-funded activist movements and community
philanthropy; and giving by individuals of modest means.
The report is
neither exhaustive nor complete and should be considered a working paper or a
work in progress. With a country as vast as India, the insights presented here
can only be a starting point, not a finished product!
To comment on the findings or engage in a
conversation about this report, readers may write to Philanthropy for Social Justice and Peace at: info@psjp.org
Tags:
Previous Next
Comments