Making A Difference – Through The Arts And A Cause 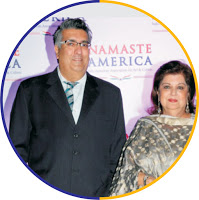 Well
known theatre artists, producers, directors Mahabanoo Mody-Kotwal,
and her son Kaizaad Kotwal run Poor-Box Productions. Most well known
is The Vagina Monologues, which has been running for over 15 years.
They also founded the Make-A-Difference Foundation to help raise
awareness and funds to help combat violence against women from the
grassroots up. Keeping the theme of this newsmagazine we wanted to
feature how they make-a-difference.
Tell
us about your day job

It’s
not a regular day job, unless it’s mounting a new production, in
which case it’s 4-6 hour rehearsals at least 4-5 times a week and more
frequent nearing the opening of the show. During fundraising, we
spend at least 9-12 months working on the project.
Your
entry into the social sector

The
Vagina monologues Talks about bringing about an awareness of abuse
towards women and trying to stop violence against them.
Internationally, it has raised over50 million dollars by the
playwright, Eve Ensler. She has opened a centre in the Congo where
she spends a major part of the year.  Since violence against
women is a major problem in India, we thought of doing something
similar, though on a smaller scale considering that we are a very,
very, small theatre company.
Learning
and difficult moments along the way in setting up the foundation
Getting
permission to set up the foundation, had its usual problems of
getting the 80-G certificate, etc. Our aims and objectives had to be
very clear….we work only for the empowerment of women. That is our
focus.
Do
you think being a celebrity makes it easier to raise awareness/funds
for a cause?
As I
am not a celebrity, cannot answer this question…….yes, being in
the public eye it’s easier to reach out and bring about awareness,
but not easy to raise funds.
What
have been fulfilling moments?
There
have been many fulfilling moments, on and off the stage, but our work
with the women for the NGO, SNEHA, in the Dharavi slums has been
extremely satisfying, as well as financially helping Haseena Hussain,
an blind acid attack victim from Bangalore. She now mentors other
victims of acid attacks and has found a regular job. There are many
others, but these are the main ones.

How
do you ensure that your partnership with the beneficiaries is
productive?
We
interact on a regular basis and are part of the process of the cause.
Thereby we get to know that the work done by the NGOs is credible and
along the lines of our aims and objectives. We have over the years
learnt that to be forthright and clear in our objectives to our
beneficiaries is  of utmost important. We look hard and deep for
credible people / organizations we deal with. Sometimes we have had
to back off from projects when we felt this was not so.
What
is the common skill you need/display when on stage /when at the
foundation?
I,
personally, have found that when I get emotionally involved without
sorting things out at a mental level, things have gone a bit awry,
but….we try our best to be as practical and judicious as possible.
It’s difficult and not easy considering the horror stories we listen
to.
How
do you see your cause scale up & remain sustainable?
The
problem is so vast, that, sometimes one feels dejected and
frustrated. But till this endemic of violence continues, we have no
choice but to toil on, because as the tag line of the play goes,
SILENCE=DEATH.
Tags:
Previous Next