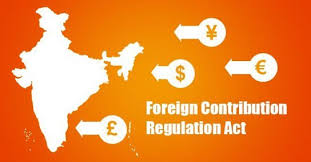 The Foreign Contribution (Regulation) Amendment Bill 2020 has been introduced in the Lok Sabha on 20th September 2020. The Bill proposes a number of drastic changes to the law governing receipt of foreign contributions and which will have a detrimental impact on charitable institutions in India.

The Bill can be read or downloaded at:

This amendment will be a major blow to NGOs working collaboratively on projects and programs.

Currently institutions are allowed to spend up to fifty per cent of foreign funds received during the fiscal year on admin expenditure. The Bill now proposes to reduce it to twenty percent.

This amendment will be a major blow to organisations in terms of payment of salaries, professional fees, utility bills, travel and other such expenditure.

Suspension in case of contravention

If the Ministry of Home Affairs “on the basis of any information or report, and after holding a summary inquiry, has reason to believe that a person (person includes an association) who has been granted prior permission has contravened any of the provisions of this Act, it may, pending any further inquiry, direct that such person (or association) shall not utilize the unutilized foreign contribution or receive the remaining portion of foreign contribution which has not been received or, as the case may be, any additional foreign contribution, without prior approval of the Central Government.”

In other words, MHA will have the power to freeze the FCRA Bank account in case of any contravention of the FCRA law.

Aadhaar of Board Members & Copy of passport and OCI card

Organisations applying for registration, prior permission or renewal of FCRA registration shall be required to “provide as identification document, the Aadhaar number of all its office bearers or Directors or other key functionaries, by whatever name called, issued under the Aadhaar (Targeted Delivery of Financial and Other Subsidies, Benefits and Services) Act, 2016, or a copy of the Passport or Overseas Citizen of India Card, in case of a foreigner.“.

Currently the FCRA registration of an organization which violates the provisions of FCRA may be suspended for “such period not exceeding one hundred and eighty days as may be specified”.

This amendment will empower MHA to suspend FCRA registration of an organization for more than six months.

Under current law there is no provision for an organization to voluntarily surrender it’s FCRA registration.

The Bill now proposes that on a request being made in this behalf by the organization, MHA may permit any organization to surrender the certificate granted under this Act, if, after making such inquiry as it deems fit, MHA is satisfied that such organization has not contravened any of the provisions of FCRA, and the management of foreign contribution and asset, if any, created out of such contribution has been vested in the competent authority as provided in Section 15(1).

On surrendering FCRA registration, assets created out of foreign contributions may also have to be surrendered to the competent government authority.

Inquiry before renewal of FCRA

Generally, renewal of FCRA registration has been relatively easy for organisations who have been compliant with requirements under FCRA such as filing annual returns in online Form FC-4, quarterly intimation etc.

However, it is proposed now that MHA, before renewing the certificate, shall make such inquiry, as it deems fit, to satisfy itself that such organization has fulfilled all conditions specified under Section 12(4) of FCRA 2010.

The Bill now proposes that organisations granted registration or prior permission under FCRA shall receive foreign contribution only in an account designated as “FCRA Account” by the bank, which shall be opened by him for the purpose of remittances of foreign contribution in such branch of the State Bank of India at New Delhi, as the Central Government may, by notification, specify in this behalf, provided that such organization may also open another FCRA Account in any other scheduled bank of their choice for the purpose of keeping or utilizing the foreign contribution which has been received from the FCRA Account in the specified branch of State Bank of India at New Delhi.

Thus, from the requirement of having designated FCRA Bank account with any Core Banking Compliant Bank integrated with the Public Financial Management Systems (PFMS) it has now been narrowed down to such branch of the State Bank of India at New Delhi.

The Bill also makes it incumbent on the specified branch of the State Bank of India at New Delhi or the branch of the scheduled bank where the organization has opened the foreign contribution account to report to the government of India, the prescribed amount of foreign remittance; the source and manner in which the foreign remittance was received; and other particulars, in such form and manner as may be prescribed.’.

The Government of India’s rationale for these draconian and cumbersome amendments can be found in the ‘Statement of Objects and Reasons’. The statement avers: