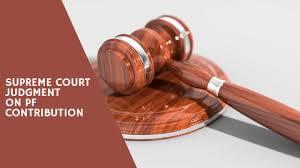 The recent decision of the Supreme Court in the case of ‘Surya Roshni Ltd. & Others’, (Civil Appeal Numbers: 39653966 of 2013, 39693970 of 2013, 39673968 of 2013) is a landmark judgment in the history of labour law. In what will have financial ramifications for many establishments, the Supreme Court has ruled that employers cannot segregate ‘special allowance’ from basic wages and must include it for calculation of provident fund deductions from employees and their matching contribution.

A bench of Justices Arun Mishra and Naveen Sinha dismissed appeals filed by many companies questioning the Provident Fund Commissioner’s decision to club basic pay with special allowances for the purpose of deduction of PF and matching contribution by employers.

Question before the court?

The question placed before the bench for adjudication was whether special allowances paid by an establishment to its employees fall within the expression ‘basic wages’ under Section 2(b)(ii) read with Section 6 of the Provident Fund Act for computation of deduction towards Provident Fund.

Allowances are part of basic wage!

Writing the judgment for the bench, Justice Sinha has stated: “The wage structure and the components of salary have been examined on facts, both by the authority and the appellate authority under the Act, which have arrived at a factual conclusion that allowances in question were essentially a part of the basic wage camouflaged as part of an allowance so as to avoid deduction and contribution accordingly to the Provident Fund account of the employees.”

Explaining the verdict, the bench of Justices Mishra and Sinha have said: “No material has been placed by the establishments to demonstrate that the allowances in question (special allowance) being paid to its employees were either variable or were linked to any incentive for production resulting in greater output by an employee and that the allowances in question were not paid across the board to all employees particular category or were being paid especially to those who avail of the  opportunity.”

The Supreme Court has essentially reiterated that any allowance which is paid universally to the employees and has not been earned with respect to overtime or increased productivity should be included in the calculation of Provident Fund.

The Employees’ Provident Funds and Miscellaneous Provisions Act, 1952 (the PF Act) defines ‘basic wages’ as all emoluments paid to an employee in accordance with the terms of their contract of employment, subject to certain exceptions. The employer, under the Provident Fund Act, has a statutory obligation to deduct the specified percentage (currently twelve per cent) of the contribution from the employee’s salary and make a matching contribution.

In spite of various judgments (of Supreme Court and various High Courts) in the past, there was still a certain amount of ambiguity prevailing among establishments on whether certain components are to be included in the definition of basic wages.

Over a period of time, many establishments/employers had introduced various elements of allowances/reimbursements/components in the compensation structure of the employees and there was extensive litigation on whether these components should be included under ‘basic wages’ for the purposes of Provident Fund contributions.

The Supreme Court has basically reiterated that any allowance which is paid universally to the employees and has not been earned with respect to overtime or increased productivity should be included in the calculation of Employees’ Provident Fund (EPF).

What is Provident Fund?

Provident fund is a welfare and social security scheme for the benefits of employees. Under this scheme both the employee & employer contribute their part, but, the whole amount is deposited by the employer. At the time of retirement, the accumulated amount is given to the employees, if certain conditions are satisfied.

Applicability of the Provident Fund Act

The law is applicable to every establishment (including religious and charitable institutions) employing twenty or more workers. NGOs/NPOs should not live under the myth that because they are established for “charitable purpose” or because they do “goods work” or are “social” or “welfare” organisations they are deemed exempt under the Employees’ Provident Funds and Miscellaneous Provisions Act, 1952 and other labour legislations.

If the salary of an employee is more than Rs.15,000.00 per month at the time of taking up employment he/she can choose to opt out and remain an “excluded employee” under the Scheme.  However, if the salary is less than Rs. 15,000.00 per month he/she must be included in the Provident Fund scheme and if subsequently his/her salary crosses Rs.15,000/- per month he/she does not have the option of opting out of the Scheme. In other words, once an employee joins the Scheme, he/she remains covered throughout his/her career.

However, under Section 26A, the employee has the option of limiting his/her contribution to Provident Fund only on the ceiling amount of Rs.15,000.00

The Supreme Court’s ruling on Provident Fund of 28th February, 2019 states that employers can’t segregate special allowances from basic salary. It has to be included for Provident Fund deductions under the Employees’ Provident Fund and Miscellaneous Provisions Act, 1952.

The Supreme Court has held that variable earning which may vary from individual to individual according to their efficiency and diligence will stand excluded from the term “Basic Wages” under the Employees Provident Fund and Miscellaneous Provisions Act, 1952.

What the Supreme Court’s ruling means is that those earning salary and special allowances together up to Rs 15,000.00 will now have to club it for purpose of Provident Fund deductions. Earlier, only the basic salary would be taken into account for Provident Fund calculation.

For example, if an employee’s basic salary is Rs 10,000.00 p.m. and in addition he/she gets special allowances of or aggregating Rs 5,000.00, unlike earlier where the Provident Fund deduction would apply only on basic salary (Rs. 10,000.00), now it will have to be clubbed with special allowance and Provident Fund deductions calculated on the combined sum of Rs 15,000.00.

The Supreme Court ruling is not expected to impact those earning basic salary and special allowance above Rs 15,000.00.

As a result of this judgment, special allowance and other similar allowances, which are part of wages shall be considered as basic wages and accordingly attract Provident Fund contribution.

The Supreme Court also analyzed dearness allowance and retaining allowance which, as such are already part of the Provident Fund contribution, by virtue of Section 6 of the Employee’s’ Provident Fund Act.

It also made reference to House Rent Allowance (HRA) which as such is not paid universally and hence excluded from the definition of ‘basic wages.’

Further, attendance incentive was not paid to employees in terms of the contract of employment nor was it legally enforceable by an employee. Similarly, transport or conveyance allowance and canteen allowance is not paid universally, ordinarily and necessarily to all employees.

Provident Fund contribution will be on total salary excluding HRA, bonus, incentive, commission, overtime but will include allowances or any other payment included in any other head which is paid across the board, grade etc.