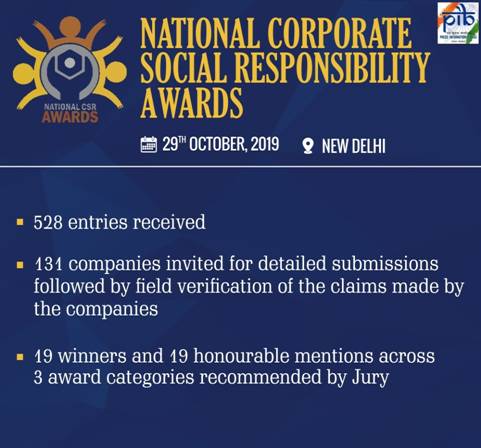 The President of India, Shri Ram Nath Kovind, presented the first National Corporate Social Responsibility (CSR) Awards to selected companies on 29th October 2019. The National CSR Awards have been instituted to recognize Corporates whose initiatives in the area of CSR were aimed at achieving inclusive growth and sustainable development. The companies were awarded based on their strategic approach in CSR and efforts in challenging circumstances, towards aspirational districts, difficult terrains/disturbed areas and national priority areas.

Based on the submissions by the companies and reports of the independent assessment made by CSR experts and the jury, 19 award winners and 19 honourable mentions across the three award categories were announced.

The winners in different categories:

In his address, President Shri Ram Nath Kovind observed that through National CSR Awards companies are being recognized for their contribution to society. Such contribution through CSR is a true manifestation of the trusteeship of wealth philosophy of the Father of the Nation, Mahatma Gandhi.

The President also announced that going forward National CSR Awards will be given away on 2nd October every year.