Compliance with the Law on Sexual Harassment at Workplace 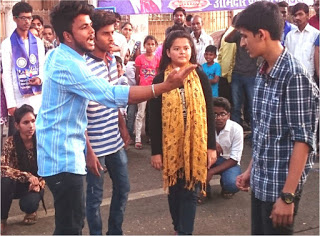 Sexual harassment of women at the
workplace is an issue that has been of serious concern and talked about in the
past few months in the professional world. With a significant number of women
entering the work place in the organized sector, sexual harassment cases are
increasingly coming to light now. Organizations need to foster a work culture
that respects the dignity of every individual employee – female or male, that
comes to work, and hence there is an urgent need to ensure not only redress but
prevention of any kind of sexual harassment at the workplace.

CAP: Do you think numbers
are correctly reported?
“Numbers by whom, of who?  In the past one and half year, many women
especially young girls are increasingly coming forth to complain. The fact
though is that these cases are not reported by the concerned organizations in
their annual report or elsewhere, there is under-reporting.”
CAP: Are men ever harassed?
Harish: “Yes, they are. The power
dynamics in a workplace are different from those say in a domestic sphere (at
homes – where usually men have more patriarchal privileges and women are in a
secondary position, in workplace situation there are instances (many) where the
women may be in a senior position to their male colleagues and can harass men,
also misuse the law on sexual harassment. Therefore, many corporate have
formulated their policies on anti-sexual harassment as gender-neutral policies…
though their emphasis may be on sexual harassment of women employees and they
argue that they are complying with the existing legislation, they want their
policies to be broader and inclusive of men”
Sixteen years after the Supreme Court
of India gave directions to all employers on addressing sexual harassment by
way of Guidelines (known popularly as the Vishakha Guidelines), the Government
of India enacted a special law on sexual harassment at workplace. The Sexual Harassment of Women at Workplace
(Prevention, Prohibition and Redressal) Act, which came into force on December 9, 2013, has clearly defined
sexual harassment and laid down specific steps organizations should take when
dealing with sexual harassment. The Act is applicable to all establishments in
the formal and the informal sector  including
schools, colleges, universities and NGOs.
As per the Sexual Harassment of Women
at the Workplace (Prevention, Prohibition & Redressal) Act, 2013, all
business organizations employing 10 or
more than 10 employees, are mandatorily required to:
1. Formulate the Company’s Policy on Prohibition, Prevention and Redressal
of  Harassment at  the workplace.
Once formulated, this should be disseminated to all employees at all locations.
2. Constitute an Internal Complaints
Committee (ICC) as per the new law. The ICC must have an external
member (he or she may be a social worker from an NGO
committed to the cause of women, or familiar with issues relating to sexual
harassment).
The ICC must prepare an annual report (for
the financial year end, which currently would be March 2016 )
which shall have the following summarized details:
This information has to be
included by the employer in the annual report of the organization as per
Section 22 of the Act.
3. Display notices in conspicuous places (like
the canteen area) frequented by many staff at all its locations regarding the
constitution of Internal Complaints Committee. Names and contact details of
all members of the ICC, penal consequences of sexual harassment violations
must be included in the notices.
4. Organize workshops and awareness programs at regular intervals to sensitize all
employees, at all locations, about the provisions of the law and to promoting
gender sensitivity.
5. Organize Orientation Programs, Seminars,
Capacity and Skill-Building Programs for all members of the ICC.

CAP: Do you think this law has been reasonably well
implemented ?
Harish: “No. The implementation is not seen in many
places across the country. When the law had just come into force in December
2013, there was heightened curiosity among private business organizations along
with anxiety on the implementation as the topic of sexual harassment was not what
they were comfortable dealing with. In the past few months, there has again been
a lull and many organizations have not taken the Act seriously. One of the
major reasons being the lack of monitoring mechanism from the Government (the Ministry
of Women and Child Development) still not in place. As a result, the
enforcement of the law still remains poor. Prior to the law, there were
Guidelines by the Supreme Court, which many concerned organizations never took
seriously. Even with the new law, the constitution of the Internal Complaints
Committee in many places is not done as per the manner specified under the law,
the gender sensitivity workshops are not held periodically, a significant
number of employees are not even aware about the law, though it is more than two
years old!
The law is applicable to not only business organizations but to even
NGOs and educational institutions, which include not just colleges but also
schools. Sadly speaking, I have not come across any Principal of a school
adhering to the basic compliance of forming an Internal Complaints Committee.
It has been reported nationally that one of the reasons for girls dropping out
from schools has been their sexual abuse and if the law is implemented by
sensitive and committed Principals of schools, this problem would be dealt with
effectively.”
While
there has been some deliberation on the subject of sexual harassment and the
new legislation among business organizations across the country in the past one
year, there needs a concerted effort by all organizations to ensure the effective
implementation of the law. Due compliance with the law on the subject would be
a key step in creating and sustaining a healthy work environment.
CAP: Do you see any changes in trends from earlier
times?
Harish: There are fewer organizations (largely multinational) that are
following the law in spirit. The only positive trend that is visible is that a
significant number of young women professionals are coming forward to complain
and assert their rights. In the last one year, we have seen examples of girls
(two) who were law interns who have mustered courage to lodge complaint against
senior Supreme Court judges, women complaining against journalists, the CEO of
a notable organization working internationally on Climate Change has been charged
by a young executive (which emboldened another woman employee of the same
organization to come ahead and complain against the CEO subsequently. I see
that women, who are aware about the legislation are effectively using the
redressal mechanism under the law to get due justice, despite the law not been
followed by organizations the way it should have been.
CAP: Any two things an organisation can do to ensure a
better culture?
Harish: “The law, apart from highlighting the redressal mechanism aspect,
also emphasizes the Prevention part. Even if the organization arranges at least
one gender sensitization workshop (with a focus on the new law) covering all
employees at all locations and then follow it up with intermittent programs
that would elicit their participation in promoting an enabling dignified work
environment, it would be a significant step. By encouraging, the employees to
have engaging conversations on the subject would signal the organization’s
accountability and sincerity towards compliance of the law in spirit.”
The second thing, which the organization can do, is to ensure that the
Internal Complaints Committee, if constituted, is active and visible to all
employees. That will go a long way in reassuring all women employees that the
organization has a zero tolerance approach on the issue of sexual harassment
and it will take all steps to ensure speedier redressal in case of any incident
of sexual harassment that may happen in future.”
CAP: What has been MAVA’s role with regard to the law?
How effective has it been? Any challenges and how do you overcome them?
Harish: MAVA has been conducting series of workshops
and trainings on the subject for business organizations, Universities and
Colleges and NGOs across the country. We are also represented as External
Member on a few companies and colleges. The implementation of law is slow and
needs to be accelerated. Through continuous process of engagement with the key
stakeholders – the organization, its top management, employees and representatives
of civil society, we will be able to make a difference.”

To know more about our work contact connect@capindia.in
Tags:
Previous Next